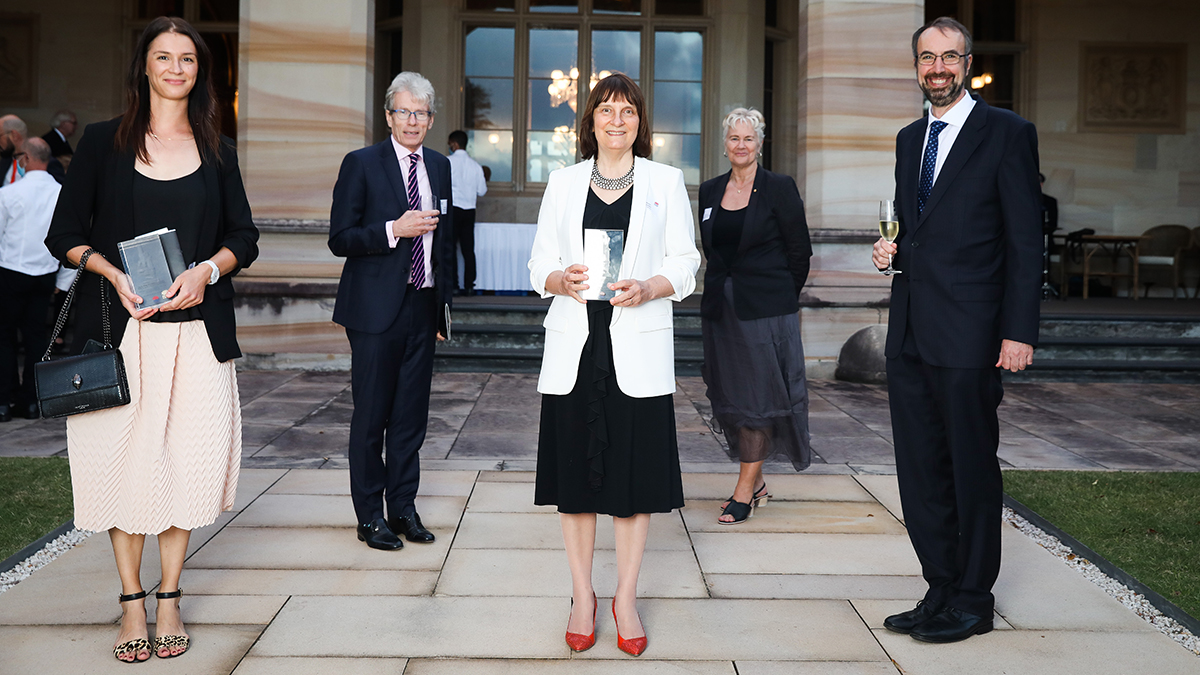 UNSW Sydney has picked up three awards at the 2020 NSW Premier’s Prizes for Science and Engineering, presented at Government House on Tuesday 27 October.

The Awards recognise excellence in science and engineering, and reward leading researchers and educators for cutting-edge work that has generated economic, environmental, health, social or technological benefits for New South Wales.

The UNSW winners are Deputy Vice-Chancellor (Academic), Professor Merlin Crossley, and Professor Ewa Goldys and Dr Jelena Rnjak-Kovacina from the Graduate School of Biomedical Engineering. They will each receive $5000 in prize money.

Professor Merlin Crossley has won the award for Excellence in Medical Biological Sciences (cell and molecular, medical, veterinary and genetics)
Professor Merlin Crossley’s research focuses on better understanding the fundamental molecular mechanisms by which genes are controlled. His research has revealed a new approach to treating inherited blood disorders, such as sickle cell anaemia and thalassemia. These are the world’s most prevalent single gene defects, affecting more than 400,000 people, primarily in tropical countries.

“I began working on the topic in 1991 when it was all basic research. The world has inched steadily forward and now, thanks to CRISPR gene editing, the disease can be corrected and hopefully soon many patients will benefit,” Professor Crossley says.

Professor Crossley says he is thrilled to receive this award.

“The list of researchers, students, and professional staff that underpin these achievements is long. I hope that highlighting specific landmarks serves to remind everyone that when people harness complex infrastructure and work together using science and reason, progress can be made, and life for patients and everyone will become better,” he says.

It is hoped that developing treatments for these lifelong conditions will also relieve the burden on health services.

Professor Ewa Goldys has won the award for Leadership in Innovation in NSW
Professor Ewa Goldys is a world leader in the development and application of advanced fluorescence techniques to biomedicine, nanotechnology and advanced materials. She pioneered the development of a unique technology – hyperspectral imaging for non-invasive medical diagnostics –  using cutting-edge fluorescence techniques. This breakthrough uses colour analysis of cells that could one day allow scientists to detect and decode cell health without needing to take samples from the body using invasive procedures.

“This simple idea of looking for patterns and regularities in cell colours has opened opportunities on an unprecedented scale for biological discoveries and novel inventions,” Professor Goldys says.

“It will yield novel, user-friendly cell diagnostics which can be performed wherever needed – using only cell snapshots and big data apps.”

“Innovation is something I am passionate about, and I love to share this passion with others. I’d like to thank UNSW, the Graduate School of Biomedical Engineering and the ARC Centre for Nanoscale Biophotonics for supporting my work to bring molecular diagnostics out of high-tech facilities and into the field to benefit end-users."

She has made major contributions towards the development of functional cardiac patches, which currently have limited use because they lack vascular supply. She has engineered innovative, silk biomaterial scaffolds that rapidly vascularise when implanted, offering hope to more than 1.2 million Australians who currently suffer from cardiovascular disease.

Dr Rnjak-Kovacina says biomaterials are key in replacing and regenerating injured tissue in our ageing population, including damage to the heart muscle caused by heart disease.

“My aim is to understand how biomaterial implant properties affect their vascularisation and integration with the body – and translate this fundamental understanding into future therapies,” Dr Rnjak-Kovacina says.

“It’s an honour to win the NSW Early Career Researcher of the Year award and have the work my team and I are so passionate about recognised. I am very grateful to Professor Laura Poole-Warren for nominating me and Paul Ashworth in the researcher recognition office for his support and encouragement during the application process.”